How and Why: Photo of Hiking Katahdin’s Knife Edge 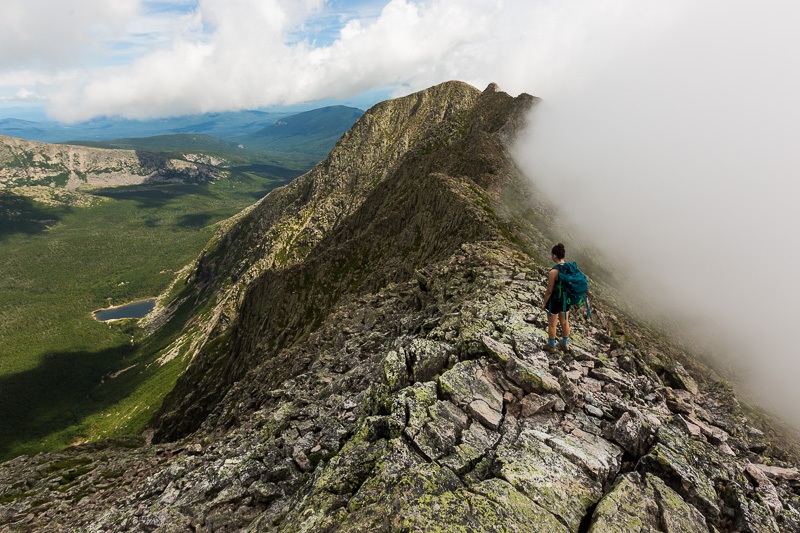 A hiker takes in the views from the Knife Edge Trail in Maine’s Mount Katahdin in Baxter State Park.

At 5272 feet tall, Maine’s Mount Katahdin is the highest point in the state and the northern terminus of the Appalachian National Scenic Trail. It”s possibly the most dramatic mountain peak in the US, east of the Rockies. This photo is one of the most popular photos I’ve posted on my social networks so far this year so I decided to write a little bit about it.

Where: Mount Katahdin in Maine’s Baxter State Park, about 3 1/2 hours northeast of Portland.

Who: I recently made a trip there with my daughter, Acadia, to hike the Knife Edge Trail, a 1.1 mile ridge line walk with dramatic views the entire length of the trail.

How: The hardest part of making this photo was getting there. To hike Katahdin as a day hike involves about 4000 feet of elevation gain and 8 – 12 miles of hiking. We made it easier by hiking 3.5 miles into Chimney Pond (visible on the left side of the photo) the day before and spending the night in one of several lean-tos near the pond (reservations are required.) Our original intent was to hike up to Pamola Peak (the high point in this photo,) hike across the Knife Edge to the main summit (Baxter Peak), then continue in a clockwise direction to return to Chimney Pond via the Saddle Trail (about a 6 mile loop.) Unfortunately, the trail up to Pamola Peak is closed due to a landslide, so we had to hike up to Baxter Peak first and then hike the Knife Edge out to Pamola Peak and back before heading back down. We chose to ascend via the Cathedral Trail, a beautiful hike, but super steep  – 2400 feet of elevation gain in 1.7 miles. But as you can see, the weather was ideal and the hike was a blast. We reached the Knife Edge as fog was still rolling up from the south side of the peak, giving a more dramatic look to the scene. Once there, making the photo was fairly straightforward. I handheld my Canon 5DIII (I opted not to carry a tripod since I knew I’d be up high during a time of day when there was plenty of light and I would be able to use faster shutter speeds, 1/400 sec. in this case, ) and I used my 16-35 Canon zoom lens, set to 16mm to take in as much of the dramatic scenery as possible. At that wide a focal length, an aperture of F9 was sufficient to give me a lot of depth of field. I’d like to give you a fancy explanation of how I composed the scene, but in this case, I just looked though the viewfinder and composed a photo that felt natural, showing off the drama of the fog, the ridge, and the steep drop-off to the cirque below. In post, I used Lightroom to add a little contrast (+29) and a little vibrance (+36) to add some pop. I also used an adjustment brush with Clarity set to +61 and painted over the foreground rocks to bring out some of the texture there.

Why: This trip was purely for fun, and to spend some time with my daughter, one on one. After recovering from cancer 2 years ago, I decided I needed to plan at least one of these one on one trips each year with each of my kids (my son and I went camping on Isle au Haut the following week) until they’re grown and out of the house (although if they’re game, I’ll do these trips until the day I die!) My daughter loves adventure, travel, and hiking, so this was right up her alley, and it felt great to share a trip with her on one of my favorite peaks on Earth.

Let me know in the comments section below if you see an image on my site that you’d like me to write about – I’m happy to share!

4 thoughts on “How and Why: Photo of Hiking Katahdin’s Knife Edge”