Drone photo of winter on the Hudson River near its source in New York’s Adirondack Mountains. Tahawus Tract, Newcomb, New York. From a project shot for the Open Space Institute.

I’ll admit to being a reluctant convert to using my drones in my photography and videography. I have always enjoyed aerial photography, and I shoot a few times every year from airplanes or helicopters. I love the aerial perspective for photography – it allows the photographer to capture the variety in a landscape that is often not possible from the ground, especially in flat or heavily forested areas. Like most photographers, when I first starting seeing drone footage from relatively affordable drones (primarily models made by DJI), I was impressed with how easy it had become to shoot aerial scenes, and I started lusting over the little quadcopters. Then I saw some footage posted on-line of a low-level flyover of the Appalachian Trail at sunset. It was stunningly beautiful and I was jealous I hadn’t shot it, but after some thought, I realized how pissed I would have been had I been hiking the trail at the moment this annoying intruder buzzed overhead. This was before the FAA had established guidelines for using drones, and before they had been banned from National Parks. At that moment, I vowed not to join in the drone craze.

A few years later, I am now deep into using drones for my photography and filmmaking. So what happened? First, it became obvious fairly quickly that to remain competitive in my photo and video business, I’d need to be able to offer drone photography as part of my mix – it has become a go-to tool for so many outdoor photographers. Second, I realized that drones are extremely effective at helping to tell the land conservation stories that I am often asked to shoot. Budgets for conservation projects are usually limited and being able to quickly shoot a few shots from the air can make a huge difference in telling the story of a place. Especially in the northeastern US where I do most of my work, finding a landscape-wide perspective can be a challenge if the property I’m shooting doesn’t have easily accessible lakes, ponds, or open rock ledges. I love spending hours on the ground hiking to those places, but not every project gives me enough time to seek out and get to those scenes. 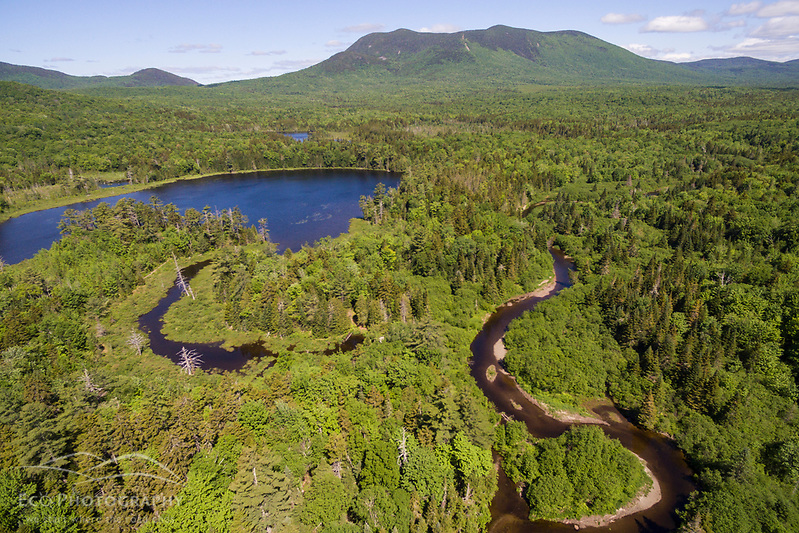 An aerial view of the West Branch of the Pleasant River, Little Lyford Pond, and Baker Mountain in Maine’s 100 Mile Wilderness. From a project for the Appalachian Mountain Club (Jerry Monkman).

While I am now firmly on the drone bandwagon, I still have my issues with them. They are noisy and intrusive, and I refuse to fly my drones when other people are around, unless they are part of my shoot. While the geek in me has a blast flying them, they really do detract from the outdoor experience much more than shooting stills or b-roll from a tripod on the side of the trail. From a personal standpoint, it’s a much different experience shooting with drones than from shooting from actual aircraft. Maybe that’s an obvious thing to say, but when shooting from an airplane or helicopter, I still feel like I’m experiencing the landscape in a personal way, even it is from 1000 feet above the ground. Whereas, when shooting with a drone, I feel like I just did a Google Earth flyover on my PC or played a video game – it’s a strange detached way to see the natural world. Thankfully, the resulting images, if done right, do resonate and help to tell the story of the places my clients are working to conserve.

Let me know your drone thoughts below in the comments.

One thought on “To Drone or not to Drone – Why I am now using drones in my conservation photography.”