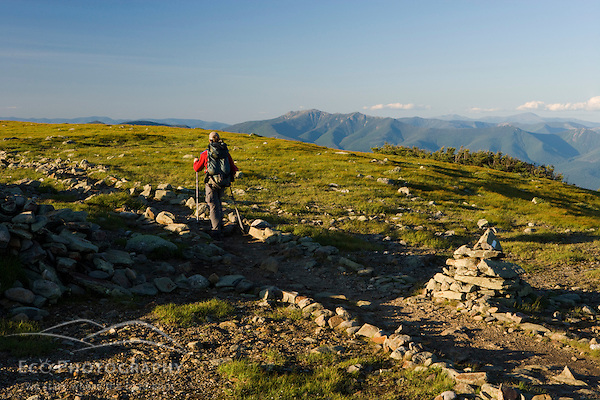 A hiker on the Appalachian Trail on the summit of Mount Moosilauke in New Hampshire’s White Mountains. Less than a mile up the trail, the hiker will encounter views of the Northern Pass right of way. (Jerry Monkman)

I just read this interesting article on the Scientific American website that analyzes a report by Citigroup which shows that the cost of residential solar electricity is now equal to or cheaper than natural gas in several regions of the world, including the Southwest U.S., and that utility-scale solar will be cheaper than natural gas in just a few years. (There is also a related article on grist.org.) I won’t venture to guess how this affects the Northern Pass project, which will be carrying hydro-power, but it does make me think that Northern Pass is a project built on 20th century thinking and technology, when 21st century technology is viable and less harmful to the environment. As renewables like solar are trending towards becoming more cost-effective, possibly before construction even starts on Northern Pass, shouldn’t we be demanding that Northern Pass use more technologically advanced solutions that don’t irreparably scar the landscape so many of us cherish?

Funding for The Power of Place has reached 50% with just one week left in the Kickstarter campaign! If you’ve been meaning to pledge, now’s the time, as once the campaign ends next Thursday, you’ll no longer be able to lend your support to this important project (or reap the rewards that go with it.)