A man crosses Mud Brook, a tributary of the East Branch of the Penobscot River in Maine’s Northern Forest. Fall. (Jerry Monkman/EcoPhotography.com)

I had a really busy summer and fall shooting many conservation-themed projects. I’ve written about a few of them in previous posts, but there are several I haven’t shared yet, so here we go…

The above photo of fellow-photographer Matt Milone was shot on a tributary of the East Branch of the Penobscot River near the new Katahdin Woods and Waters National Monument in northern Maine. We were exploring a 4000+ acre property recently conserved by the Open Space Institute (OSI) that protects nine miles of beautiful river shoreline. The East Branch of the Penobscot makes up much of the eastern border of the new national monument to the north, and it is a popular destination for paddlers looking for multi-day wilderness adventures. In addition to the river frontage, the property will also be developed for non-motorized recreation with a network of mountain biking trails already under construction to the east of the river. This will be a great addition of recreational opportunities close to Baxter State Park and the town of Millinocket. 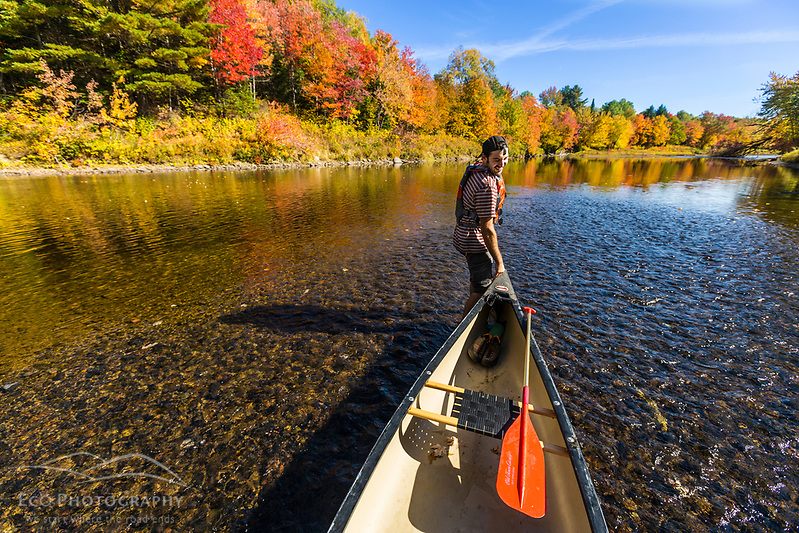 A man pulls a canoe through shallow water on the East Branch of the Penobscot River in Maine’s Northern Forest. Fall. (Jerry Monkman/EcoPhotography.com) 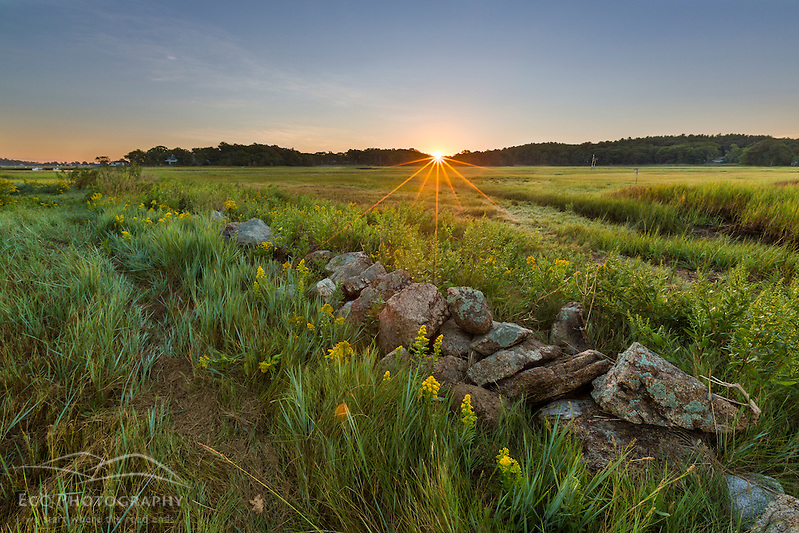 Sunrise over the salt marsh along the Essex River at the Cox Reservation in Essex, Maassachusetts. (Jerry Monkman/Ecophotography.com)

I spent one week in September shooting a handful of properties for the Essex County Greenbelt Association (ECGA,) a land trust in Essex County, Massachusetts (on the coast, north of Boston) that does an amazing job conserving some of the best open spaces in one of the most expensive real estate markets in New England. Some of the properties I shot on this recent project were in the process of being conserved or newly conserved, and others have been conserved for many years. I’ve photographed the Cox Reservation in Essex (pictured above) several times before and it was a joy to return to its stone walls, fields, and beautiful salt marshes along the Essex River. The below photo of a salt marsh on the Castle Neck River in Ipswich is from a new project that will conserve several hundred acres when complete. 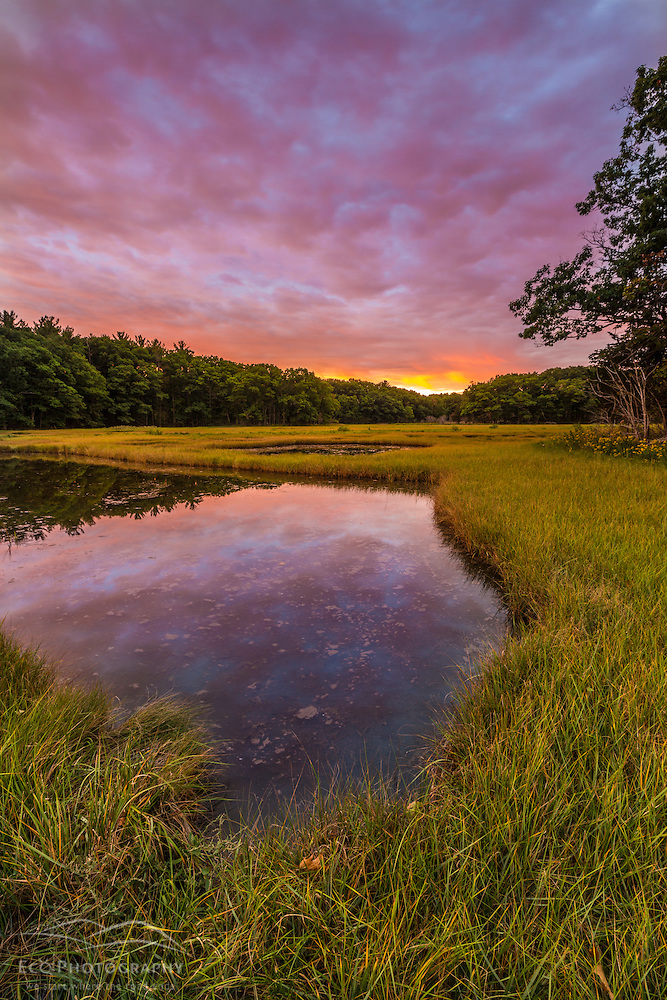 Dawn on the salt marsh along the Castle Neck River in Ipswich, Massachusetts. (Jerry Monkman/EcoPhotography.com) 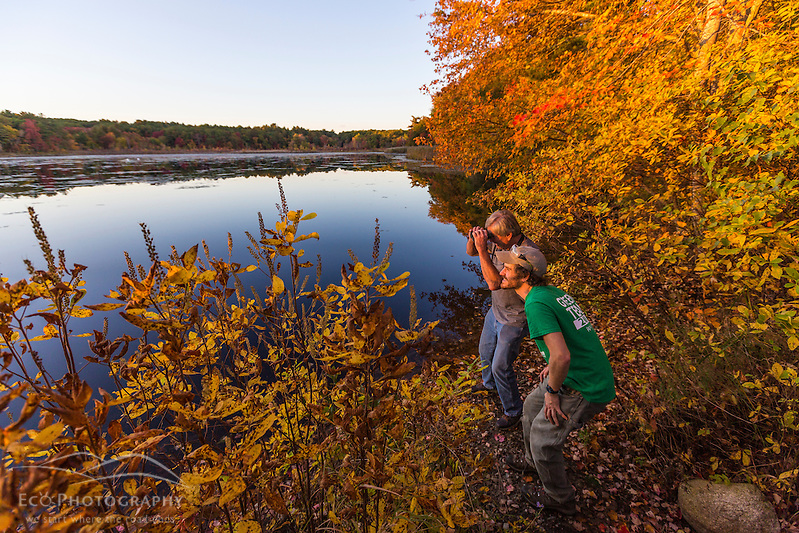 Another Massachusetts land trust I work for every year or two is the Wildlands Trust, which conserves land south of Boston, primarily in Plymouth County. Like ECGA, the Wildlands Trust protects a really cool variety of habitat, from beaches with nesting endangered piping plovers to winding salt marsh-lined tidal creeks to the unique inland landscape of glacial kettle holes and piney-oak woods. This fall I spent a day shooting in their new Hoyt-Hall Preserve in Marshfield which had a cool mix of pine and hardwood forests as well as this pond that made for some great bird watching. 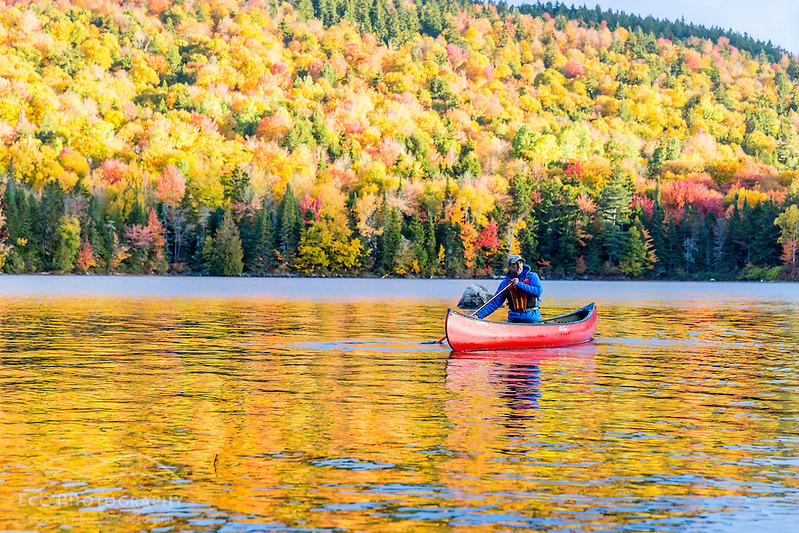 I also made a return trip to the Greenough Ponds near Errol, New Hampshire (pictured above.) I photographed these ponds several years ago for the Trust for Public Land as part of a large conservation effort that involved thousands of acres of forests that have since become parts of various protected public spaces, including Umbagog National Wildlife Refuge, the Errol Town Forest, and Greenough Ponds Wildlife Management Area (owned by the state.) The whole area is classic New England north woods – miles of dirt roads through thousands of acres of undeveloped hills and forests dotted by the occasional pond and frequented by as many moose as people (if not more.) On this trip I was shooting for the National Fish and Wildlife Foundation who funded a portion of the Greenough Ponds purchase with money from Walmart’s Acres for America program. It was great to return to a place like these ponds several years after they were protected and to see it wild and unchanged since my previous visit – I don’t always get to do that! For this shoot I want to thank fellow photographer Joe Klementovich (pictured above) for helping out, as well as Errol locals Tom and Bill Freedman (below) who have helped me out on several projects in the area. By the way, if you’re looking for a fishing guide in the area, Tom is your man. Check out his website for more info. 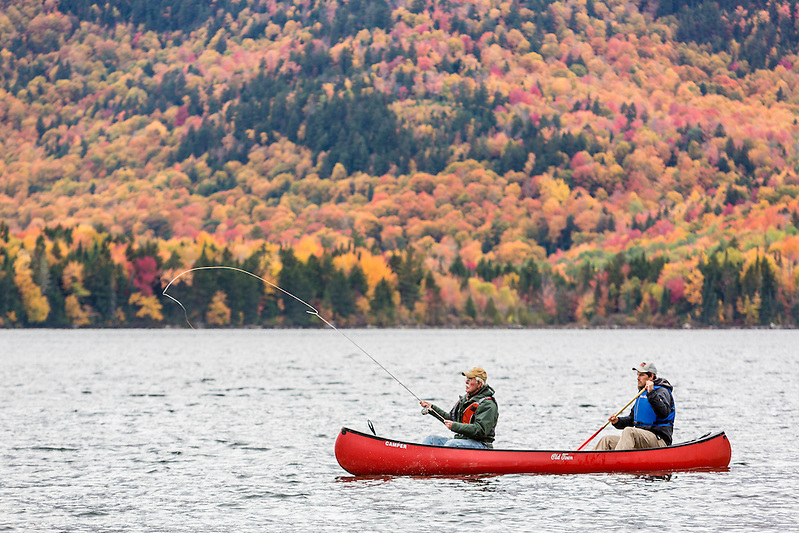 If you’re interested in seeing more from these shoots and others from late summer/fall, check out this gallery of new work: