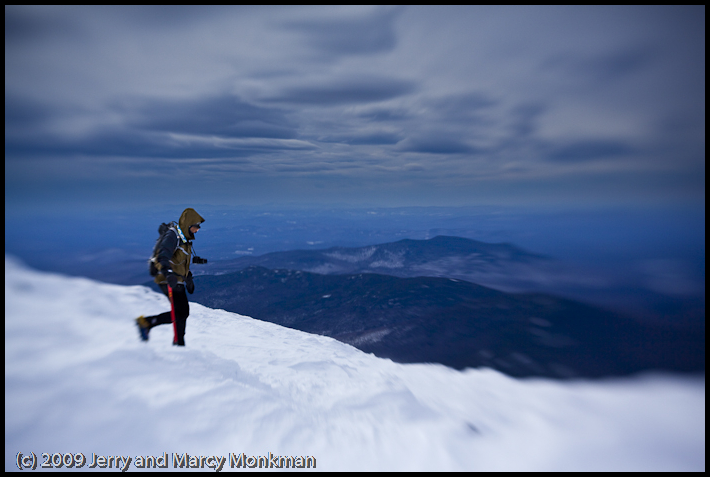 This past weekend, Marcy and I traveled to New Hampshire’s Mount Washington to lead a winter photography “Edutrip” for the Mount Washington Observatory.  It was the third time we’ve led one of these trips, and the peak’s reputation for having the worst weather in the world lived up to expectations as usual.  On Saturday, we rode up the mountain on a snowcat under partly cloudy skies an 110 mile visibility.  60 mph winds greeted us on the summit, but we still managed a couple of hours of wandering the summit cone making pictures before nasty weather moved in bringing mixed precipitation and winds gusting over 90 mph.  That kind of weather makes photography nearly impossible, but we still had a great time working with our students and experiencing the elements.

I brought along my Canon 5d Mark II and attempted to shoot some video.  I didn’t have a lot of luck, but I was still inspired to put together the below multi-media piece about the mountain.  I’ve been making multi-media slide shows for years, first using slide projectors, and more recently using software by Photodex, called Pro Show Producer.  For this piece, I used Adobe Premiere Elements, which let me easily mix stills, video, narration, and music.  Let me know what you think!

Yesterday I went out and shot some video of the floods happening nearby as a result of the weekends Nor’easter. I tried out my new Bogen 503 HDV fluid video head, which let me pan much smoother than what I was able to accomplish before with my ballhead or hand held.  I highly recommend it if you plan to shoot video.  Here are some samples from that shoot:

3 thoughts on “Mount Washington in Multimedia”