In The Power of Place, we suggest that permitting decisions about Northern Pass will be made in 2015, but here we are in 2016 and the permitting process is still underway for the controversial electricity transmission line project. Last summer, the US Department of Energy released the project’s draft environmental impact statement. Shortly after, Northern Pass announced a new proposed route that included burying 52 miles of their new transmission lines in the White Mountains. Due to this new proposed route, the DOE extended the public comment period on the draft EIS until April 4, 2016. Comments can be made on-line: http://www.northernpasseis.us/ or in person at hearings in NH which have yet to be announced. 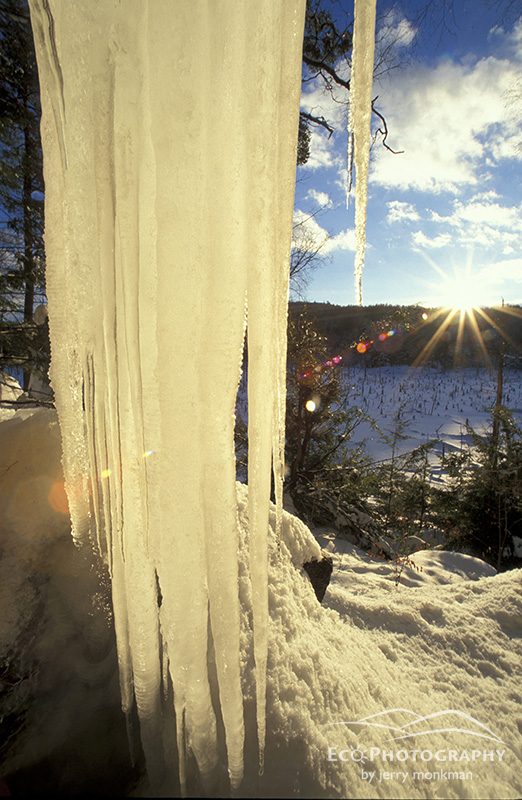 Icicles at sunset in Pawtuckaway State Park in Nottingham, NH.

In addition to the Department of Energy permit, Northern Pass must also receive a permit from the State of New Hampshire’s Site Evaluation Committee (SEC). In December the SEC ruled the 25,000 page Northern Pass Application complete, which initiates the State’s one year review process. The SEC is holding public hearings next week, throughout the state. A complete list of these hearings can be found on the AMC website here: http://www.outdoors.org/conservation/wherewework/wmnf/northern-pass-project.cfm

Those of you who have seen The Power of Place know that the original proposed route of Northern Pass would have built towers as tall as 135 feet that crossed the Appalachian Trail and marred views throughout the White Mountains region. The new proposed route will bury the lines in the Whites, thus protecting the views from the trail, but 130 miles of towers will still be built north and south of the White Mountains, affecting landscapes in places such as Nash Stream State Forest (including views from the Cohos Trail,) Pawtuckaway State Park, and Weeks State Park (and many places in between.) If you have yet to watch the film, you can see the first ten minutes for free below:

You can rent the entire film for $1.99 on Vimeo on Demand here: https://vimeo.com/ondemand/thepowerofplace