Last August, President Obama signed an executive order creating Katahdin Woods and Waters National Monument in northern Maine. Nearly 90,000 acres in size, the land making up the new park was donated to the feds by Roxanne Quimby, who has been acquiring land in the area for much of the last twenty years. The woods are thick here, providing habitat for most of Maine’s well-known wildlife – moose, bobcat, Canada Lynx, black bear, brook trout and more. The federal designation was controversial with residents in the area, but I’ll save an analysis of the controversy for another day. Today I just want to share some photos that I’ve made in the area that is now part of the national monument.

Most of the new park is sandwiched between the eastern border of Baxter State Park and the East Branch of the Penobscot River, and was for many decades managed for forest products while also being open to the public for recreation – hunting, fishing, snowmobiling, hiking, and paddling. Much of the new park (though not all) is now off-limits to hunting and motorized recreation, and it will continue to be an excellent place to hike, fish, paddle, and cross-country ski. 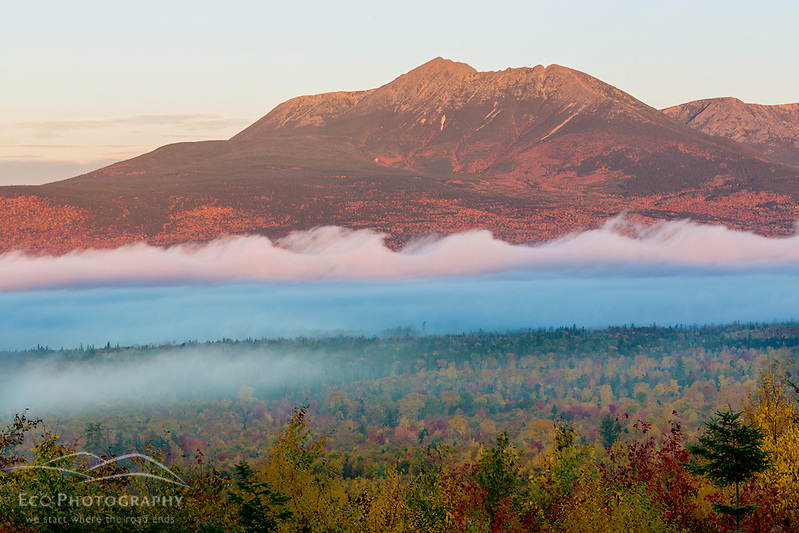 Access to the monument from the south is via a system of private logging roads, leaving from Stacyville, Maine. (Details can be found on the park’s official website: https://www.nps.gov/kaww/index.htm) A 16 mile dirt loop road (not accessible in winter) explores the woods and rises to a couple of clearings and picnic areas along the way with some great views of Mount Katahdin (above). While Katahdin isn’t actually in the park (it’s in neighboring Baxter State Park,) it’s presence dominates the views in the southern part of the new park. 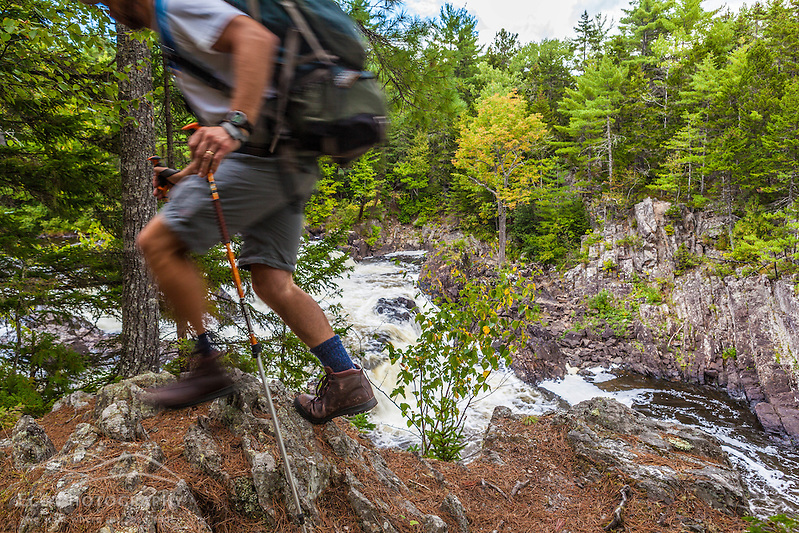 A man hikes the International Appalachian Trail in Katahdin Woods and Waters National Monument in Maine’s northern forest. Near Grand Pitch on the East Branch of the Penobscot River. (Photo: Jerry Monkman)

I’ve done a little hiking in the park, primarily along the East Branch of the Penobscot River, which has some very scenic sections. More than 20 miles of the International Appalachian Trail traverses the park, from south to north (the exact mileage is still being figured out as the southern section near Katahdin Lake is currently being re-routed.) Several lean-to’s along the trail provide backpackers with good camping opportunities. I have yet to hike the section of trail that follows the ridge that includes Lunksoos and Deasy Mountains, but from what I can tell, those are the spots with the best views to be found while hiking. 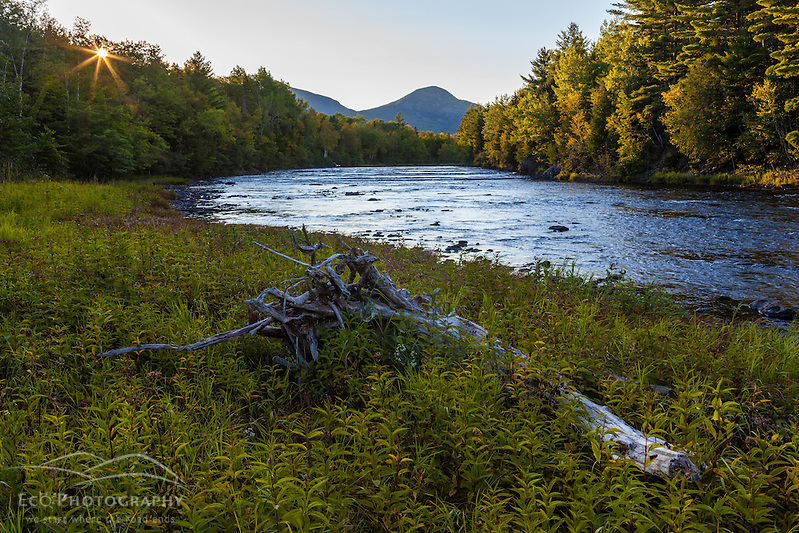 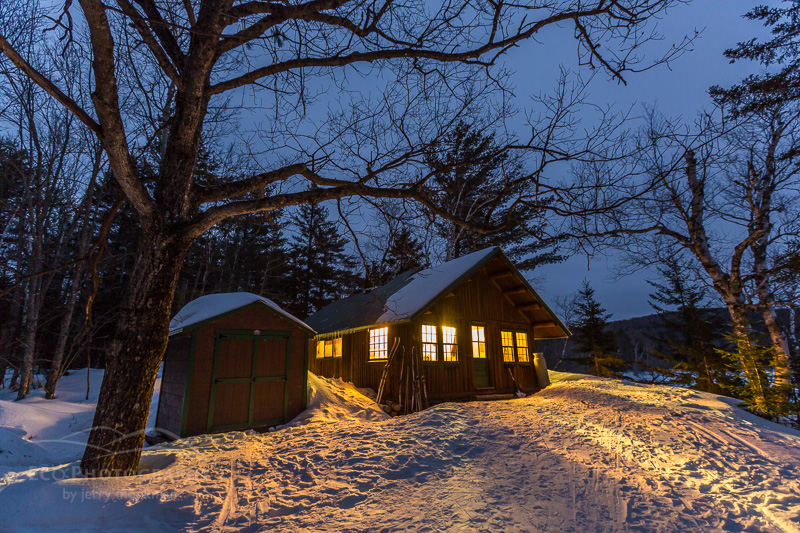 Winter access to the park is currently limited to skiing or snowshoeing in from the northern entrance near Matagamon Wilderness Camps on Maine Route 159 in Patten. There are two backcountry cabins that are in the park and I recently checked out one of them, Haskell Hut (above), which is about a five mile ski in from the trailhead and is perched high on a bank above the Haskell Deadwater section of the river. Big Spring Brook Hut is another 5 miles beyond Haskell Hut. About 15 miles of ski trails are currently groomed and maintained by volunteers, which made the trip in an easy two-hour ski. 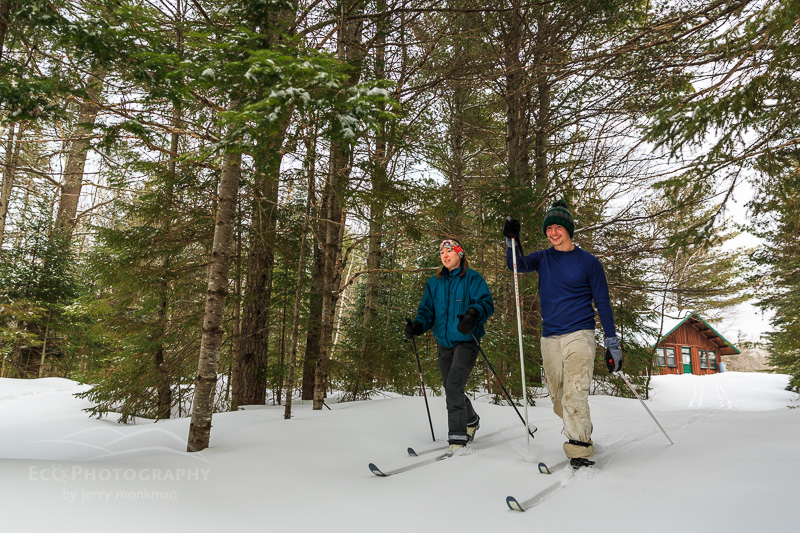 Haskell Hut was a sweet place to spend the night. The cabin was fully stocked with a great wood stove, firewood, and a three-burner propane stove. It was toasty warm and comfortable for the five of us that spent the night there (it sleeps eight.) Though we never saw the sun (it snowed the entire night and the next morning,) I’m sure there are great sunrises over the river that can be seen from the hut’s front windows. 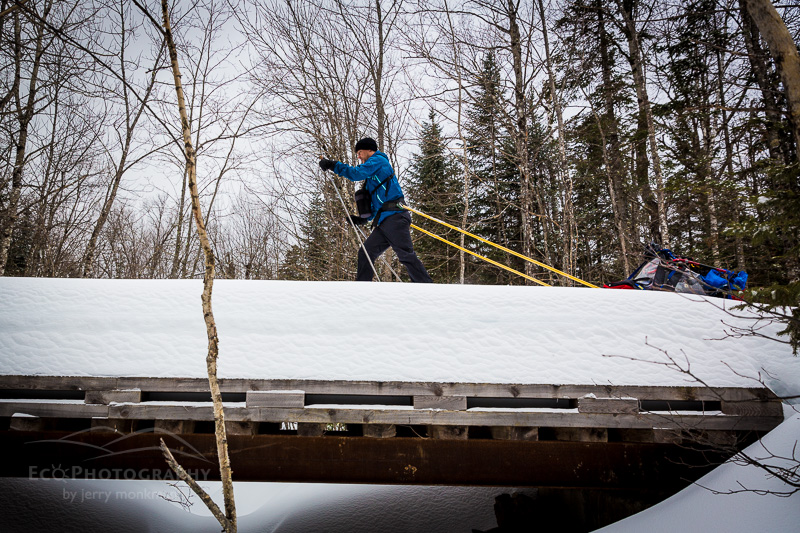 For the winter of 2016-2017, it is free to stay in the huts, but reservations are required. More info can be found on the park’s website here: https://www.nps.gov/kaww/planyourvisit/winteractivities.htm.  From Haskell Hut, we continued heading south, skiing another 5 miles and crossing the river on a pedestrian bridge to Bowlin Camps, a traditional Maine hunting and fishing lodge (and cabins) that is open year-round. Bowlin has some great cabins and they’ll cook a great meal for you as well. The camps primarily serve snowmobilers in the wintertime (a main snowmobile route just outside the park traverses their property.) We missed being the first skiers to ever stay at the camps by one night!  Since the trails are groomed from Haskell Hut to Bowlin, I hope more skiers check this place out. 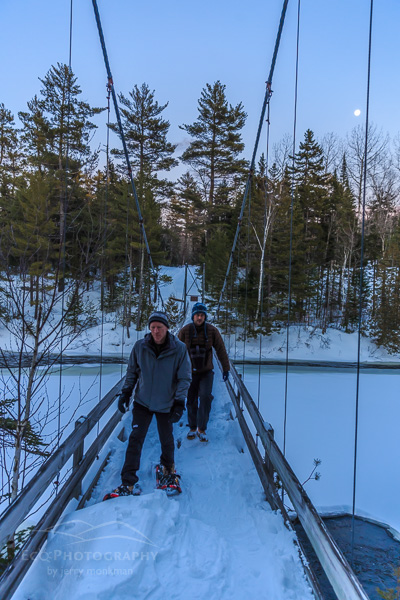 Visiting the new Katahdin Woods and Waters National Monument takes a little work since it’s brand new and very little infrastructure is in place, but it’s worth the effort if you want to experience some of the best of Maine’s northern forest.