How and Why – Spiderweb and Sunstar Photo. 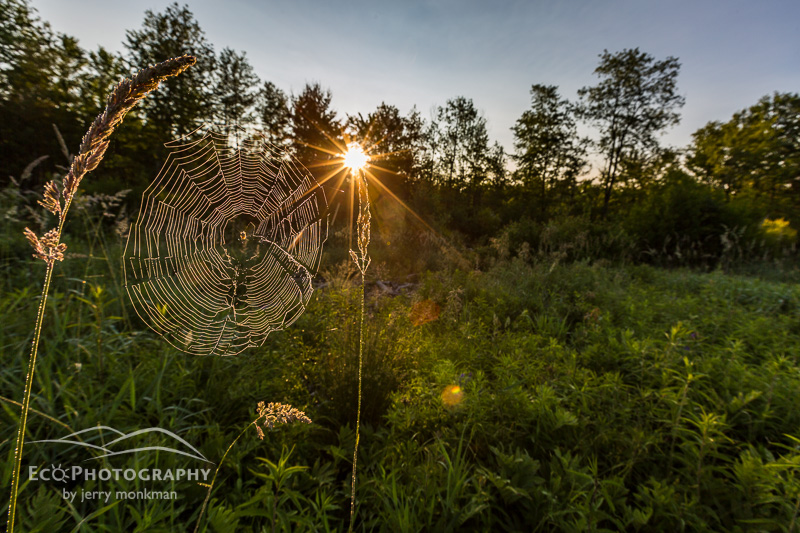 A spider web in the morning in a field in Meredith, New Hampshire.

This is another recent photo that got a little extra traction on Instagram, so here’s some additional info about it:

Where: A field near Page Pond in Meredith, New Hampshire.

Who: I was out solo, shooting for The Trust for Public Land (TPL).

How: This field is a fairly nondescript place (it’s actually a recovering clear-cut,) and I had been trying to make some pretty landscape shots centered around some black-eyed susans and the sunrise, when this spiderweb caught my eye from about 25 yards away. Back-lit and covered in dew, it was pretty easy to spot. It turned out that there were several webs in the area, but this one seemed the most interesting to me aesthetically because of how it is built between the two beautiful pieces of grass that had gone to seed.  I decided to use a wide angle lens to show some of the field and make the viewer aware of the surroundings. I shot the image with my Canon 5D MarkIII and a Canon 16-35mm lens set at 16mm. I was only about 1 1/2 feet away from the web, which kept it relatively big in the frame despite the extreme wide perspective. I used an aperture of F11 (at 1/80 second and ISO 50) to get enough depth of field to keep all of the web sharp and to keep the background relatively sharp. The small aperture helped create the sunstar effect. I chose an exposure that wouldn’t blow out my sky, which meant most of my shadows were underexposed. I corrected this in Adobe Lightroom by increasing the exposure slider by +.71 and the shadows slider by +76. This brought out detail in the shadows which was relatively noise-free thanks to using the lowest ISO on my camera. After increasing the exposure, I did have to reduce the highlights by -57 to darken the sky back up. I finished my post-processing by moving the clarity slider to +55 and the Vibrance slider to +36.

Why: Several years ago I photographed a forest near Page Pond for TPL as they were working to create the Page Pond and Forest, which became a Meredith Town Forest. This year, they are working with the local community to add an adjacent 200 acres of forest that abuts the current town forest and they asked me to make some photos that they can use in fundraising materials, grant applications, etc. While shooting for TPL, I always work on creating a collection of images that show people using the land (their motto is Land and People,) but I also try to include some nature photography that shows the essence of the landscape as well. I rarely set out to make images like this spiderweb shot as part of these shoots, but when I find them, they are an excellent way to round out the photo story of the place I’m shooting. Below is a gallery of other images from my Page Pond shoot:

2 thoughts on “How and Why – Spiderweb and Sunstar Photo.”