The Power of Place – a New Documentary by Jerry Monkman 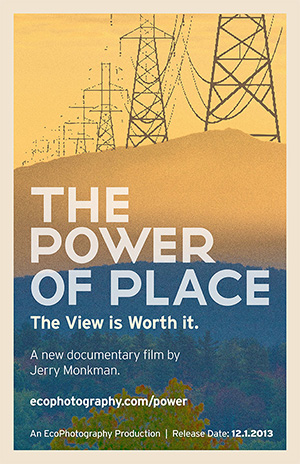 We’re funded – thank you everyone for your generous contributions! Visit our Wall of Inspiration to see some of the great people who made this film possible.

Those of you familiar with my photography know that I have devoted a majority of my 20 year career to helping to conserve open space throughout New England. This year I have decided to embark on one of the more ambitious projects I have ever undertaken: The Power of Place, a 30 minute documentary film that explores the negative impacts of Northern Pass, a proposed electricity transmission line that will run 180 miles down the center of New Hampshire.

When I first head about Northern Pass, I’ll admit that I thought it was a fairly innocuous project. After all, I happily use electricity every day, and more than 75% of the proposed Northern Pass route will follow an already existing right of way. However, my mind changed when I was asked by the Society for the Protection of New Hampshire Forests to produce a series of videos about the project. The more I learned about the details of the project and talked with people who will be directly affected by it, the more I believed that Northern Pass is a bad idea for New Hampshire. New Hampshire will just be giving up too much, and the benefits that may result from the project are too little.

The Power of Place. In this film, I will combine classically beautiful landscape cinematography with interviews of those intimately connected to the land to show how the wild and undisturbed character of the land has the power to fuel inspiration, imagination, and an interconnectedness with nature. The main question the film will ask is “Do we want to trade this power for electricity that most likely won’t even be needed in New Hampshire?” To make this film possible, I am “crowd-funding” the project through Kickstarter.

Northern Pass: If Northern Pass is built as proposed, it will have a significant impact on the overall character of the land in some of New Hampshire’s most iconic landscapes, including The White Mountain National Forest and Appalachian National Scenic Trail. (The overall impact of Northern Pass is summarized in this FAQ.) These places played a major role in inspiring me to become a conservation photographer twenty-plus years ago. We think of conserved land like Appalachian Trail as protected from this kind of development, but obviously we need to be vigilant to insure that current policy makers honor the conservation intent of previous generations.

How The Power of Place can make a difference: My goal is to produce a film that will depict the at-risk New Hampshire landscape in such a compelling way that those who view it will demand that Northern Pass be stopped or significantly altered. The film will show that Northern Pass not only affects the 1000+ families and businesses that will be directly impacted by their proximity to the right of way, but that Northern Pass will negatively impact the New Hampshire experience for the millions of people who visit each year to enjoy its natural beauty and wilderness character.

In addition to using The Power of Place to sway public opinion, I will also be sending DVD’s of the film to more than 500 decision makers in both the New Hampshire and U.S. governments (several agencies in both need to approve the project.)

My previous work on Northern Pass: I produced several short videos in 2011 and 2012 about the impact of Northern Pass for the Society for the Protection of New Hampshire Forests. Here’s the most recent:

You can see them all in my Northern Pass Vimeo album.